Monica Rial
Towa (永遠の標, Towa no Shirube, lit. "Guide of Eternity"), nicknamed "To-to", also known as the Eternal Mark, is an artwork created by the Hikari family 98 years before the main events.

Towa has grey hair and green eyes in the anime. However, in a manga illustration, her eyes seem blue. She appears young despite her real age, 98 years old.[1][2]

She wears a long-sleeved violet dress which reaches down to her knees with ear piercings, a choker and boots in the same color. After joining the Niwa family, she dresses as a maid.

Towa is created 98 years before the main events by a member of the Hikari family. She is at one point donated to someone who places her at the top of a lighthouse.

Towa first appears during the Sage of Sleep arc to help Daisuke rescue Dark who had been sealed in a magical mirror artwork. Towa has the ability to find items, so she finds the mirror Krad had thrown into the ocean again and gives it to Daisuke because he looks "cute" to her. She makes a deal with Daisuke: if she becomes his guide in the mirror world to find Dark, the boy will have to find his way out without her help, Dark will carry her and she'll be cherished as a precious artwork in the Niwa home.

Entering the mirror world gives her the appearance of a small bird, and she uses it to stay close to Daisuke during his quest to bring back Dark. Gradually losing her energy, she guides and gives clues to her partner without ever telling him about her state.

As Daisuke's researches come to an end, exhausted by the trip, Towa is about to die and faints, but Dark comes back to his host at the very last minute and kisses her back to life, much to her delight. After apologizing to Satoshi Hiwatari for joining the Phantom Thief's side, she decides to follow Daisuke to the Niwa household, where she becomes a maid and assists Emiko.

Even if she holds a minor role after her main arc, she appears regularly to help the family, particularly to relay information between Daisuke/Dark and the rest of the family. For example, when Dark enters the Second Hand of Time's universe to rescue Daisuke with Risa and Riku, she is able to track Dark and notice that he isn't alone.[3] In the same vein, after Risa is kidnapped by Argentine later in the story, Towa can sense Riku's health and informs Emiko and Kosuke.[4]

Towa has the ability to shapeshift into a bird at will and find lost items.

In the anime, the Eternal Mark is located in a private mansion near the town. The house gets partially destroyed by a landslide less than 5 years before the main events and the artwork is left in the abandoned building.

Daisuke Niwa one day goes to the house to clean the statue and announces Dark’s heist for the following day. Satoshi Hiwatari then places special black ore on the Eternal Mark to seal Dark away; however, Risa Harada and Takeshi Saehara’s souls get trapped with Dark in the process. Daisuke Niwa now needs to find the ore again to destroy it, and requests Towa’s assistance.

After introducing herself and making sure the boy promises he’ll find his way back without her help and steal her afterward, Towa teleports them to a mysterious yet familiar world. Here, Daisuke only has one hour to find the stone and Towa leads him under her bird form. The artwork ultimately reveals this world takes place 20 years in the future.

The black stone destroyed, she collapses from exhaustion and, like in the manga, Dark gives her energy through a kiss and brings her back home.[5]

Towa spends the night in Daisuke’s bed until Dark kisses her cheek in the morning, waking her up. Flustered, she changes into her bird form again.[6]

Emiko uses her as the household's maid from now on and Towa assists her during cleaning, shopping and general house management.[7][8] She enjoys following Daisuke's love stories and teasing him about them.[9]

Because of the growing power of the Black Wings[10], her behaviour becomes unusual: for example, she one day mistakes makeup remover for food.[11]

Dark one evening comes back home and explains that Daisuke has been taken by a woman called Freedert. While Towa, in her bird form, is panicking on the table, the thief mentions the Second Hand of Time, an artwork that was supposed to be sealed, and Kosuke guesses Daisuke’s snow painting resonated with the artwork and freed it.[12] Towa and Emiko serve a snack while Dark retrieves the painting from the Harada household, but the artwork’s behaviour suddenly turns strange as she mysteriously says she can feel that Dark, Riku and Risa entered the Second Hand of Time’s world.[13]

When the thief returns with the artwork, Towa can still feel Daisuke’s presence inside, but Dark stops her from touching it. Indeed, the painting corrupted his arm when he touched it. Horrified, Towa screams.

Kosuke finds an older version of Freedert’s tale, whose original title was Ice and Dark. Its grim ending and details about the Second Hand of Time had been rewritten during the Cultural Revolution. The man reads the book for his family, who are shocked by its real contents. Dark immediately tells Towa to locate the Wedge of Time, the key to Daisuke’s freedom. Even if she admits her strength has weakened lately, the family gathers around her in the house's basement and she uses her powers. She suddenly feels the sword’s presence and locates it, allowing the thief to retrieve it.[14]

During winter break, Christmas is getting closer and the Niwa family starts decorating. Towa is already dreaming of the romantic potential for Riku and Daisuke’s relationship - a view the boy doesn’t share. The discussion is cut short as Towa hangs decorations weirdly, worrying Emiko once again.

As signs of the Black Wings finally awakening spread in town, Towa stays with Daisuke, who is determined to endure his own pain during his fight alongside Dark. She warns him about the thief’s powers, but a strong earthquake cuts the discussion short. Due to the Black Wings, Towa finally turns to stone.[10] She returns to normal once Dark seals himself inside the artwork.[15]

Dark Mousy: Towa says Dark is "like a god" in the world of artworks and ardently and jealously admires him.

Emiko Niwa: Emiko doesn’t hesitate to give her more work than she can handle.[16][7]

Towa's artwork form in the anime, plus the black stone 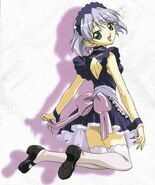 Towa in her anime maid uniform

Add a photo to this gallery

Retrieved from "https://dnangel.fandom.com/wiki/Towa?oldid=8877"
Community content is available under CC-BY-SA unless otherwise noted.