Stage 4, Part 15
The artwork nicknamed "Defective" is a sentient non-Hikari artwork that was created by one of the Hikari family's disciples. It is considered a failure.

The artwork resembles a locket with an intricate rosette pattern on the front. It includes a sophisticated chain with a diamond-shaped bead at the bottom.

Defective also has a human form with short black and white hair and black bandages on his left eye. He wears large monochrome clothes with changing numbered elements, a big hat and a cape.

This artwork is apparently teasing and silly, but hides a mischevious side.[1]

Defective was created by a talented and, according to Satoshi Hiwatari, troublesome disciple of the Hikari family. It is at one point in Keiji Saga's possession.[1]

On the day of the middle school dance party, Daisuke Niwa dreams of flying with tapirs, then of a circus where he recognizes friends and family as performers and spectators. As Daisuke searches for Dark, Defective makes a surprising grand entrance and asks him about his dream.[2]

One day, Emiko Niwa, in Dark's name, announces the phantom thief will steal it despite lesser artworks being under other Niwa branches' supervision.

At Keiji Saga's residence, Satoshi Hiwatari warns Dark in person about the unmanageable nature of the artwork, but the thief ignores him. After Hiwatari leaves the room, the artwork awakens in Dark's hand.[1] Its human form appears and, changing him into a tapir, imprisons the thief in the locket. Daisuke's protestations earn the boy a question: isn't a life without Dark his dream?[3] 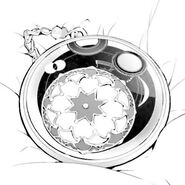 The defective locket
Add a photo to this gallery

Retrieved from "https://dnangel.fandom.com/wiki/Defective?oldid=8241"
Community content is available under CC-BY-SA unless otherwise noted.