A wiki dedicated to everything about the manga D.N.Angel created by Yukiru Sugisaki and its adaptations. Help by creating or editing any article! The community is currently editing over 105 articles.

If you love D.N.Angel, you can contribute to this wiki by creating or editing any of our articles!

D.N.Angel is a Japanese manga series written and illustrated by Yukiru Sugisaki. It premiered in Japan in the magazine Monthly Asuka in November 1997 and finished in January 2021.

Xebec adapted the manga into a 26-episode anime series which aired in Japan on TV Tokyo from April 3, 2003 until September 25, 2003. A PlayStation 2 video game, light novels and several drama CD have also been released. 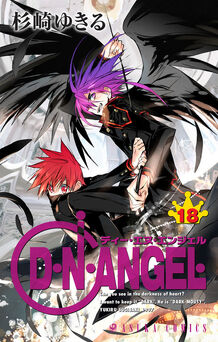 Retrieved from "https://dnangel.fandom.com/wiki/D.N.Angel_Wiki?oldid=9017"
Community content is available under CC-BY-SA unless otherwise noted.